When using feature branches, it's rare to directly develop using the master branch. In the example below, one developer might be working on a change called "feature 1" while another developer works on a separate enhancement "feature 2".  Each developer writes/commits code in isolation in separate branches.  When the enhancement is ready, that developer creates a pull request and merges the change back into master. The diagram below illustrates this example. Each bubble is a commit. 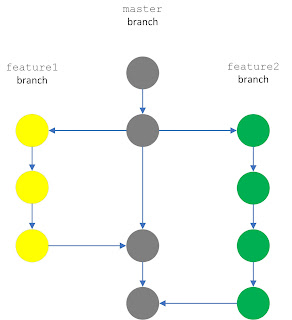 Feature branches work best if the branch contains one targeted enhancement. Including multiple changes in a feature branch often lengthens the time the feature branch lives. It also makes code reviews more difficult as the change is more complicated.

The more developers working on a codebase, the more discipline the team needs regarding source control and change management. Even with feature branches, the chance of code integration issues on merge increases with each developer added. That is because the more developers making changes, the higher the probability of integration issues and code conflicts. The higher the probability that multiple developers are working on the same section of code at the same time. Yes, each developer is working in a separate branch, but those changes will be merged to master at some point.

Feature branches should have a short life. Most of my feature branches live for less than one business day. They are narrow and targeted. If I need to make a "large change", I break it up into separate smaller changes using multiple feature branches.If a feature branch must live longer due to forces beyond my control, I rebase or merge in changes from master and address any needed merge issues.

Feature branches should be removed after they are merged into master. If you don't, the resulting branch pollution will become confusing. The list of existing branches will grow to a large number. It won't be obvious which branches are active and which are historical.

Frequently rebase the feature branch against the master branch. Definitely rebase before merging back into the master branch (or creating a pull request which will accomplish the merge when completed). More importantly, it will consolidate changes made for the feature branch in git history. It's common for developers to merge rather than rebase to incorporate new changes from master.  Using merge is more intuitive.  That said, rebase makes git commit history easier to interpret as feature branch commits will be consolidated.  Additional information on rebasing can be found here.

An example series of commands to accomplish this follows: 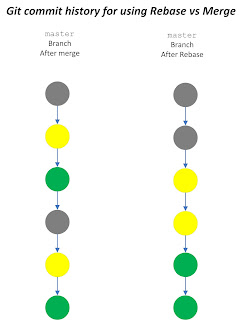 Thanks for taking the time to read this article. I'd love to hear your thoughts.