I have a need to enhance a set of Java EE applications to support mobile development projects.   As mobile developers seem to prefer JSON formats to XML for passing data to/from mobile devices, I had a need evaluate current Java JSON libraries for use by the supporting Java EE applications.  The client prefers open source products to vended products.  The most prevalent open source product choices seem to be the following:

As with all product evaluations, it’s important to establish the criteria by which product choices will be graded and on which a product decision will be made.  The criteria used in such a product choice would obviously vary per project and organization.  I’ve settled on the following criteria:

Not all criteria are necessarily weighted equally; weights given to each item will vary per project and enterprise.  It’s also possible that individual projects might have additional criteria not listed here.

The evaluation criteria were prioritized by the needs of my upcoming project.  It's possible that your priorities might be different.  All criteria were assigned a numerical score from one to ten with ten being the best.

I view this as the most important of the criteria as it most directly lower costs of ownership.  With both Gson and Jackson creating and reading JSON formatted data were two liners.  I’ve provided the source for my prototypes in the reference section below.  With my prototype, there was no need to write custom serialization/deserialization logic; both products do have robust options to do this should it be needed for your projects.  Both products by default handled escaping special characters like quotes and carriage returns.  The prototype source code and all dependencies can be downloaded from here.

One reason Gson slightly edges out Jackson is because it has better documentation.  The Gson documentation is better organized and more concise.  As a result of that documentation, constructing the Gson prototype took a little less time than writing the Jackson prototype.
It’s also notable that Jackson has a clumsy distribution: They need a one-zip download that contains binary jars, source jars, Javadoc jars, license and documentation.  Instead, all of these are downloaded separately and the product is structured so that it’s not obvious which jars you need for your particular project.

Note that coding using the classes provided with the JSR 353 spec takes much longer and it’s much easier to create bugs.  My prototype (I re-coded the same product with each of the products) required over 100 lines of code using the JSR 353 construct as opposed to the handful required by either Gson or Jackson.

I did not code a prototype for the Json.org product as it’s not a real product.  There’s no formal distribution bundle.  For distribution, you download class source individually and build it.  There are no unit tests, so you can’t validate your build very easily.  Essentially, product source becomes additional source in your project that you must maintain.  It became clear that this product isn’t a valid option, despite the fact it appeared near the top of internet searches for JSon libraries.

Community activity is important for open source projects as products will become obsolete without care and feeding.  Being part of the Java EE specification means that the JSR353 specification have or will have support from all the Java EE implementers, both commercial and open source.  It’s hard to compete with that.

It should be noted that both Gson and Jackson typically have multiple releases per year.  Both products are used in several open source products.  Both Gson and Jackson have ample community support and will no doubt be enhanced for some time to come.

The number of downloads could only available for one of the four products:  Gson had 143,904 downloads as of March 14, 2014.  Somebody built the binaries for the java classes on Json.org; that unofficial distribution had 10,821 downloads on March 14, 2014.  Download statistics for Jackson isn’t published as far as I can find.  For JSR353, it’s not possible to identify download statistics; it’s not clear that everybody who downloads a Java EE application server with JSR 353 support in it will use that section of the container for JSON processing; they could use either GSon, Jackson, or some other library.

The performance test was identical for all products.  The test consisted of starting with a complex value object with data and using that object to produce JSON-formatted data.  That JSON formatted data was also read and marshaled into the value objects.  This is a very common usage scenario.  Source for the performance evaluation can be downloaded from here.

Memory was measured by noting consumed memory (total memory less free memory) both before and after the test.  The test was run for 100,000 iterations to make time and memory usage more noticeable.  Results are in the table below. 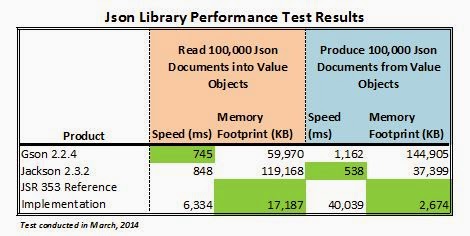 The JSR353 reference implementation is at the extreme; it was a lot slower than the other two libraries, but appears to have a much smaller footprint.  It’s possible that the JSR test took so long that there was a garbage collection during the test, which means that the memory measurement is understated.

Gson versioning support uses annotations.   When coding value objects that will correspond to the JSON data read or produced, you use the @Since annotation t record the version in which the field appeared.  When you instantiate Gson to read or produce JSON data, you have the option to specify the version of JSON that will be used.  Any fields from later versions will be ignored.

None of the other products appear to have versioning support.

All three viable product options have licenses that are acceptable to most organizations.  Gson uses Apache 2.0.  Jackson’s license appears to have changed over time; Jackson was LGPL up to version 2.1 and an Apache license thereafter.  Jackson does not specify clearly which version of the Apache license it uses.  Furthermore, its distribution method doesn’t place a copy of the license in what you download.

Either Gson or Jackson are reasonable choices.  Both products are very easy to use for common use cases and have options for customized serialization/deserialization logic if needed; for most uses custom logic won’t be needed.

My choice for my upcoming project is Gson.  I’m lured by the superior documentation and versioning support.

I hope you’ve found this entry helpful.  Thanks for taking time to read it.