Everyone's dabbling with microservices these days. It turns out that writing distributed applications are difficult. They offer advantages to be sure. However, there is no free lunch. One of the difficulties is automated integration testing. That is, testing a microservice with all the external resources it needs including any other services it calls, the databases it uses, any queues it uses. Just setting up and maintaining these resources can be a daunting task that often takes specialized labor.  All too often, integration testing is difficult enough that the task is sloughed off. Fortunately, Docker and it's companion product Docker Compose can make integration testing much easier.

Standardizing on Docker images for deployment artifacts makes integration testing easier. Most organizations writing microservices seem to adopt Docker as a deployment artifact anyway as it greatly speeds up interaction between application developers and operations. It facilitates integration testing as well as you can deploy services you consume (or mocks for the services you consume) temporarily and run integration tests against them. Additionally, consumers for your service can temporarily deploy your docker image to perform their own integration tests. However, as most services also need databases, message queues, and possibly other resources to function properly, that isn't the end of the story. I've previously written about how to dockerize (is that a word?) your own services and applications here.

Docker Compose makes it very easy to assemble multiple images into a consistent and easily deployable environment. Docker-compose configurations are YAML files. Detailed documentation can be found here. It is out of scope for this blog entry to do a complete overview of Docker Compose, but I'll point you to an open source example and discuss a couple of snippets from the example as an illustration. 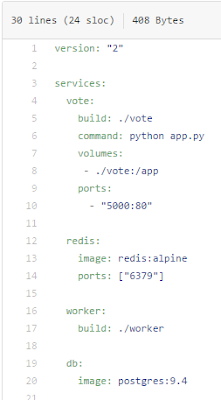 The screen shot on the left contains a snippet of a docker-compose configuration. The full source is here. Note that each section under services describes a docker image that's to be deployed and possibly built. In this snippet, images vote, redis, worker, and db are to be deployed. Note that vote and worker will be built (e.g. turned into a Docker image) before they are deployed. For images already built, it's only necessary to list the image name.

Other common compose directives are as follows:

This test utilizes the DockerProcessAPI toolset as I don't currently work in environments that require a docker-machine and the Docker Remote API (Linux or Windows 10 Pro/Enterprise). If your environment requires a docker-machine (e.g. it is a Mac or an earlier version of Windows), then I recommend the Spotify docker-client instead.

The integration test for the health check uses Docker to establish a RabbitMQ environment before the test and shut it down after the test. This part is written as a JUnit test using the @BeforeClass and @AfterClass annotations to bring the environment up once for the entire test and not for each test individually. 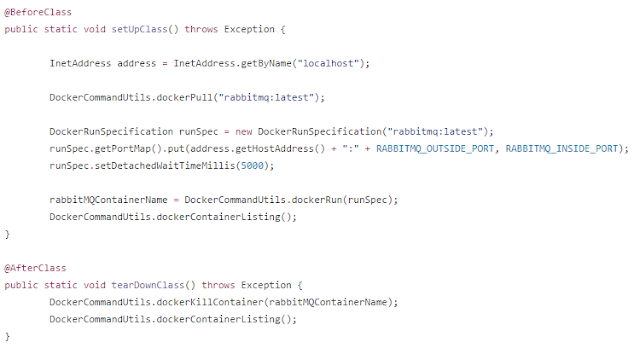 In this example, I first pull the latest RabbitMQ image (official distribution). I then map a port for RabbitMQ to use and start the container. I wait five seconds for the environment to initialize, then cause a logging for the current docker environment running.

My log of what Docker containers are running isn't technically required. It does help sometimes if there are port conflicts where the test is running or other problems with a failed test that need to be investigated. As this test runs in a scheduled manner, I don't always know execution context.

After the test completes, the @AfterClass method will shut down the RabbitMQ instance I started and once again cause a container listing just in case something needs to be investigated.

That's a very short example. Had the integration test environment been more complicated and I needed Docker Compose, that would have been relatively simple with the DockerProcessAPI as well. Here's an example of bringing up a Docker Compose environment given a compose configuration YAML:

Here's an example after the test of bringing that same environment back down:

In addition, there are additional convenience methods on the DockerProcessAPI that can log compose environments that are running for investigative purposes later.

Thanks for taking time to read this entry. Feel free to comment or contact me if you have questions.